Ok – it is a contradiction – but I am a homebody who loves to travel. After a day of work it is hard to make me budge from my favorite chair. However a holiday spent at home is not a proper one. I love to visit – reasonably civilized – locations staying in a nice hotel with sufficient infrastructure to use my laptop for writing my daily travel journal (in Finnish only – sorry) and uploading the daily photos and videos.

We have been around Central Europe a lot on our motorcycle trips. Currently we like to stay longer in one place and therefore prefer to fly to distant locations or enjoy the air-conditioned comfort of a car on a road trip. So far we have crossed the Atlantic a couple of times and hopped over Eastern Europe to reach Japan. The last trip before the COVID-19 pandemic was a road trip to Western Europe.

This has long been a passion of mine. My first bike was a Honda enduro that I got for my birthday as a teen. The forest trails next to my then home became familiar as I had no driving licence and the bike was not road legal anyway. The thrills and spills on the dirt bike tought me how to handle a motorized two-wheeler. Then life happened and I was bikeless for decades.

I acquired my first bike as an adult when I was in my forties. It was a

Honda VF 750 C Magna, model 1999. I purchased it from a dealer in the spring of 2000. The beautiful looks of the custom bike prompted several nice comments from friends and perfect strangers alike. I took some trips on my Magna before trading it in for a sport tourer.

I purchased my dream bike from a dealer in July of 2004. 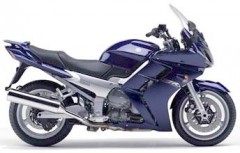 A Yamaha FJR 1300 ABS, model 2003, suited my sporty driving style much better. Also the shaft drive eliminated the highly annoying need to oil the chain several times during a road trip. I wrecked my highly modified bike in a spectacular high speed tumble on a German autobahn near Lübeck in July of 2007. That just meant that I had to get me a new one.

Yamaha FJR 1300A, model 2007. I modded the bike in the following years. Most significantly by having the suspension replaced with the same Öhlins rig the motorcycle police use in their FJRs. A Dynojet Power Commander was installed to give the bike a small power boost but mostly to even out the torque range. Also other minor enhancements have tailored the sport tourer just to my liking.

In recent years motorcycle travel has been replaced by the desire to spend more time in one place and less on the road. Also climate change with more extreme weather conditions nowadays gets a motorist wet either from rain or sweat. This hobby was suspended indefinitely in September of 2019 when I sold my bike.

I used to read a lot when I was younger but as the pace of working life increased I started to prefer stories in a visual form. Movies became an essential method of relaxation. My collecting hobby began about the same time that DVDs appeared in the market. The collection has about 1400 titles (movies and TV series). Most are in DVD but the latest ones are on Blu-ray. I have dismissed with the cases and placed the disks in protective sheets to allow for a more space economical storage.

In recent years, as the streaming services have become available, owning a title has become less significant. Also the growth of my collection was affected by the bankrupsy of the vendor with the best supply of decently priced items – I guess there might be a correlation or even causation there somewhere. 🙂

I am also a foodie, so access to nice restaurants and food markets for fresh produce is practically a requirement and certainly a factor when selecting locations to visit. Luckily my partner shares these preferences so we tend to easily agree on where to travel next.

I feel sorry for the person who keeps up the national average of alcohol consumption on my behalf. However I do love the occasional glass of fine wine and when travelling without a motorized vehicle I do enjoy a glass of local brew at lunch.

I am a serious science buff. Almost anything science related peeks my interest since I love to understand how things work and to learn new facts. My special fascination is astrophysics. I can’t do the math to save my life but I love the fact that ancient stars had to explode to create the elements that we all consist of.

I am following the NASA Mars missions with interest.

We use cookies on our website to give you the most relevant experience by remembering your preferences and repeat visits. By clicking “Accept”, you consent to the use of ALL the cookies.
Cookie settingsACCEPT
Manage consent

This website uses cookies to improve your experience while you navigate through the website. Out of these, the cookies that are categorized as necessary are stored on your browser as they are essential for the working of basic functionalities of the website. We also use third-party cookies that help us analyze and understand how you use this website. These cookies will be stored in your browser only with your consent. You also have the option to opt-out of these cookies. But opting out of some of these cookies may affect your browsing experience.
Necessary Always Enabled
Necessary cookies are absolutely essential for the website to function properly. These cookies ensure basic functionalities and security features of the website, anonymously.
Functional
Functional cookies help to perform certain functionalities like sharing the content of the website on social media platforms, collect feedbacks, and other third-party features.
Performance
Performance cookies are used to understand and analyze the key performance indexes of the website which helps in delivering a better user experience for the visitors.
Analytics
Analytical cookies are used to understand how visitors interact with the website. These cookies help provide information on metrics the number of visitors, bounce rate, traffic source, etc.
Others
Other uncategorized cookies are those that are being analyzed and have not been classified into a category as yet.
Advertisement
Advertisement cookies are used to provide visitors with relevant ads and marketing campaigns. These cookies track visitors across websites and collect information to provide customized ads.
SAVE & ACCEPT
Powered by